United Collieries Ltd was formed in 1898 to amalgamate 9 collieries and a further 23 collieries were added in 1902, among which was James Wood Ltd with Robertson, Love & Co brickworks subsidiary. The capital of the group was £2 million, a very large sum. Among the companies amalgamated was the Glasgow Iron and Steel Company of Clydesdale and Calderbank, who after the nationalisation of their steel interests were to become one of the largest brickmakers in Scotland in the 1980s.

Robertson, Love & Co were liquidated in 1916 but continued to make firebricks as part of United Collieries Ltd. When coal was nationalised in 1947, the brickworks were reorganised as United Fireclay Products Ltd. and comprised the Etna and Atlas Firebrick Works, the Bathville Pipe Works, the UNICOL Tile Works, all at Armadale and the Brownhill building brickworks at Clelland, Lanarkshire. The chief refractory brands were Etna 933% alumina), Atlas (38% alumina), and Atlas A (42% alumina), all based on local fire clays. The Bents Mine near Stoneyburn supplied an excellent 42% alumina fireclay from which the Mars brand was made, but the fireclay was worked out and the mine closed in 1929. The Drum Mine near East Whitburn took over and the Northrigg No 7 pit supplied fireclay for pipes and some coal. The Tippethill Mine (38% alumina, 2.5% iron) replaced the Drum Mine in 1960 and the Pottishaw Mine replaced Northrigg in 1963.

Woodall – Duckham bought United Fireclay Products Ltd in 1957 to secure their source of fireclay shapes for gas retorts. The modern West Works was started in 1960 with a 400-foot tunnel kiln. Heathfield & Cardowan Pipeworks Ltd was bought in 1968 and at that time the Company was at its largest capacity, employing about 600 men and women. Demand for pipes fell due to competition from plastic pipes and the Bathville Pipe Works was closed in 1970. Lower demand for refractories led to the Etna works being converted to make building bricks under the Etna brand and the closure of the Atlas Works in 1973. The Company had again changed hands being bought by the Gibbons Dudley Ltd for £715,000 in March 1971. As refractory demand fell further the Company was bought by Steetley Ltd in 1981, who changed the West Works into a facing brickworks and sold the Etna and Brownhill Works to GISCOL Ltd.

Source  – John Watson was a Lanarkshire coalmaster who during the 1850s leased minerals at Bathville area, lying at the eastern edge of the Boghead coalfield. Here steam coal, ironstone, and clay shales were worked along with the Boghead gas coal. Watson purchased the Bathville estate in 1859.,

John Watson died in 1864, by which time the firm was trading as John Watson & Sons. The same year saw the expiry of James Young’s licence which had governed oil production from cannel coal, and the Watson brothers were quick to construct the Bathville oil works, where a range of oil products were produced which carried the kudos of being manufactured from the famous Boghead coal.

Edinburgh merchants W. & .H. Potts marketed Watson’s oils throughout Scotland, and efforts were made to appoint sales agents in England. Oil production appears to have ceased in about 1871, although the industrial complex at Bathville continued to have developed with various pits, two brickworks (producing common and fire bricks), and an engineering workshop. The company failed in 1874 and the estate was put up for sale in 1875.

01/07/1859 – The Glasgow Herald   – We understand that the estate of Bathville, Linlithgowshire, has been purchased by John Watson, Esq., coalmaster, Glasgow, at the sum of £10,500. This estate, which has hitherto been held on a long lease by Mr Watson, contains the celebrated Boghead gas coal, blackband ironstone, and other valuable minerals.

06/09/1864  – Edinburgh Gazette  – The Trustees and Executors of the Deceased John Watson, Esq. of Bathville, Coalmaster in Glasgow, ceased to have any interest in the Company carried on under the Firm of John Watson & Sons, as Coalmasters at Glasgow, Bathville, Netherwood, and elsewhere, on the 1st day of August 1864. The Business of John Watson & Sons will be continued by the Subscribers, Thomas, William, and David Watson. August 31, 1864.

17/06/1865 – Glasgow Herald – Bathville Oil Works, By Bathgate, 12th June 1865. The subscribers beg to intimate to the oil trade that they have this day appointed Messrs W. and H. Potts, Port Hopetoun Warehouses, Edinburgh, as agents for the sale of their Bathville Patent Paraffin Oil in Edinburgh and South-East of Scotland. The trade will be supplied by them from their stores in Edinburgh, or direct from the works. 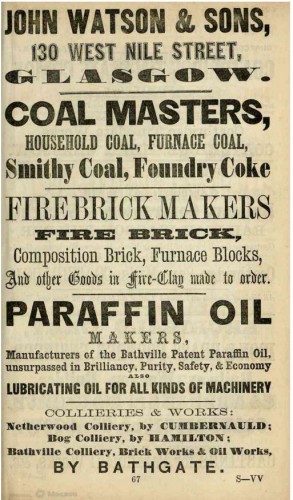 16/01/1868 – The Scotsman – Extract of Report by Dr Stevensen MacAdam:- “This Oil is a Cheaper and Better Illuminating or light-giving agent than the best standard Pennsylvanian Petroleum. It does not char the which so much, and it continues to burn clearer for a longer time. The Bathville Oil is remarkably safe, and will not give off any inflammable vapour under 120 Fahrenheit. Petroleum is generally below this standard.” John Watson & Sons, Manufacturers, Bathville Works by Bathgate. Agents – W & H Potts, Edinburgh. This oil is sold in nearly every town in Scotland. Please see that you get Bathville Oil.

01/02/1869 – The Scotsman – The Bathville works, belonging to Messrs. Watson & Sons, and situated about two miles from Bathgate, are of a considerable extent. They contain 150 retorts and give employment to between 300 and 400 persons.

12/10/1870 – Glasgow Herald – Bricks bricks bricks – The best double milled fire bricks are now being delivered per N.B Railway at Glasgow at 40s per 1000 and composition bricks at 30s per 1000. Orders attended to – apply John Watson & Sons, Bathville near Bathgate.

22/03/1871 – The Leeds Mercury – Wanted, and oil merchant to purchase and cultivate the sale in Yorkshire of new and valuable lubricants just patented in Britain. Address Watson’s Bathville, Bathgate, N.B.

28/10/1871 – The Leeds Mercury  – Notice to oil manufacturers and dealers. -Bathville Trinidad Oil- (Patents of 1869 and 1870.) – We beg to intimate, on behalf the Patentees this Oil for Currying Leather and other purposes, that Proceedings will be instituted against any person or persons Infringing their Rights, either false representations or use of their trade name or mark. Teale and Appleton Solicitors for the Patentees.

11/05/1877 – Edinburgh Gazette  – Sequestration of John Watson & Sons, coalmasters and oil and brick manufacturers at Bathville, near Bathgate, as a Company, and of Thomas Watson, William Watson, and David Watson, all coalmasters and oil and brick manufacturers at Bathville aforesaid, the individual partners of said company, as such partners, and as individuals. The trustee hereby intimates that the commissioners have audited his accounts made up as at 24th April 1877, and have postponed a dividend until the recurrence of another statutory period. McLelland, Mackinnon, & Blyth, For WM. Mackinnon, Trustee. Glasgow, 8th May 1877.

Below – 11/05/1875 – Glasgow Herald – The Estate of Bathville for sale including 2 brickworks. The brickworks are capable of producing 3 million of composition and firebricks annually and there are ample materials in the lands for the manufacture for many years. There are 2 managers cottages, 59 workmen s houses and a superior grocery store on the lands. All the houses and brickworks are lighted with gas … 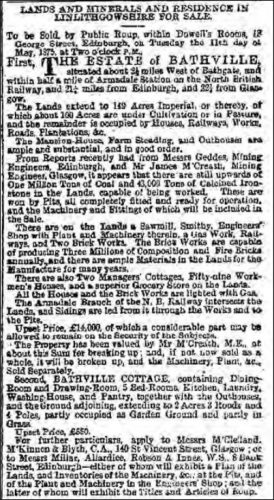 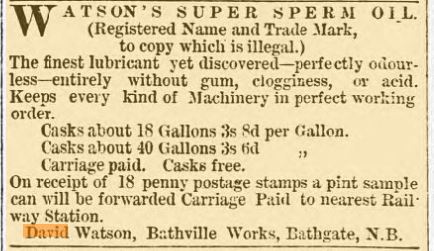