17/06/1933 – The Scotsman – At a sitting of the Edinburgh Dean of Guild Court yesterday, Lord Dean of Guild McLennan presiding, the following warrants were granted for the erection of buildings in Edinburgh … The Granton Brick Co Ltd, 63 Castle Street. Six kilns at West Wharf, Shore Road, Granton.

Below – 10/07/1933 – The Scotsman – Brickmaking at Granton. Sir Samuel Chapman, M. P., was the central figure in an interesting little ceremony at Granton on Saturday. Beside the West Pier there, a new and up-to-date establishment has been erected by the Granton Brick Company (Ltd.), and the formal opening was attended by a large company. The plant so far installed is only a portion of what it is intended ultimately to set up, but the machine put in action on Saturday is alone capable of turning out 22 bricks per minute. In view of the reported shortage of bricks at present, the opening of the new works is particularly opportune. When all the plant is in operation, the works will be able to turn out about 300, 000 bricks per week. Sir Samuel Chapman started the operations on Saturday by placing in the machine a quantity of the material used in brickmaking, and later he took part with a squad of workmen in rapidly passing the bricks by hand from the machine to a corner of the building, where they were stacked. 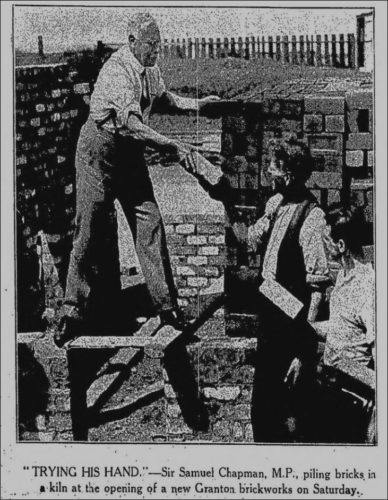 Below – 14/07/1933 – Midlothian Advertiser – When Sir Samuel Chapman M.P opened the new works of the Granton Brick Company, Ltd., on Saturday, he did it in no formal way. Taking his jacket off and rolling up his sleeves, he actively participated in the making of the first five hundred bricks. He shovelled the raw material into the “mill” end of the plant and then took part in the stacking of the bricks as they were ejected from the machine at the rate of about 25 per minute.

Below – 1938 – The information on this page states the Granton Brick Company operated from the West Wharf, Shore Road, Granton. It is believed that certainly, the original built kiln was on the West Wharf itself and perhaps the buildings situated on the Wharf on the top right of the map below are indeed the brickworks. Although permission for 6 further kilns were granted, it is possible because of the short time span the company was in operation, that they were never erected. 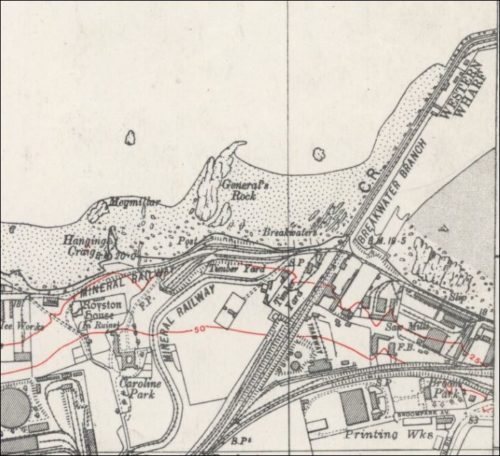 05/05/1939 – Edinburgh Gazette – Granton Brick Company Limited struck off the company register and as such, is now dissolved.