Grangehill Estate Brickworks, Kinghorn, Fife. (Note – SBH – These may have been known by another name).

Below – 27/01/1906 – Fifeshire Advertiser – Important proposal. New industry at Kinghorn. Prospectuses have been issued for the formation of a joint-stock company for the manufacture of sand-lime bricks and stone and tiling to the West of Pettycur near Kinghorn … William Don Gillies Esq of Grangehill is a director of the company … The site chosen for the erection of the works has every convenience which could be desired and is most favourably situated for the economical manufacture of the bricks. It adjoins Pettycur Harbour and lies to the south of and adjacent to the public road from Burntisland to Kirkcaldy and it has been arranged that a short siding will connect the works with the North British Railway system … 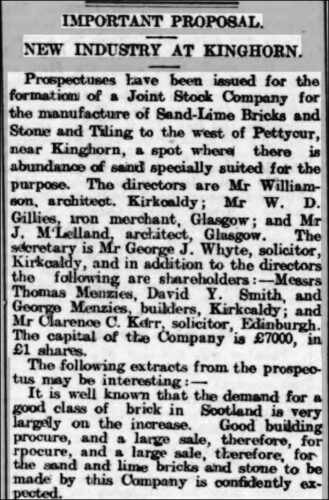 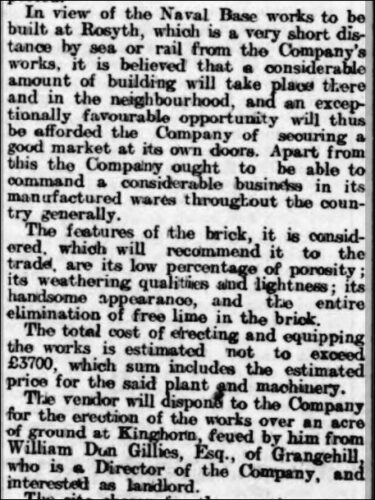 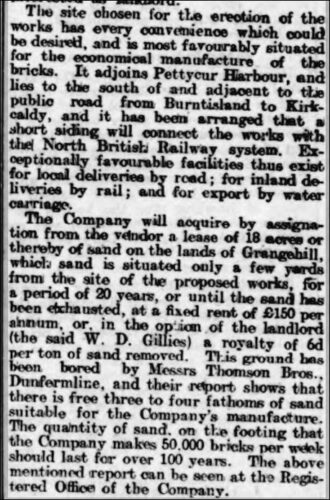 04/08/1910 – Dundee Evening Telegraph – Rosyth contractors and Kinghorn Sand – The sandpits opened some time ago by Mr Fred Graham Youll, Leith, (Graham-Yooll?) on the Grangehill estate, to the west Kinghorn, have this week been taken over by Messrs Easton Gibb & Co., the material be used in the construction of the naval base at Rosyth. quantity 500,000 tons is likely to be removed. with daily output of tons. is understood that Messrs Easton Gibb & Co. are negotiating for the supply of water to manufacture brick on the spot.

13/08/1910 – Fifeshire Advertiser – American firm may start sand brick factory at Kinghorn. There is a good prospect of a sand brick factory being started at Kinghorn. The manufacture of sand brick is a new industry in Scotland and considerable interest will be taken in the venture. The great sandhills to the West of Kinghorn are an asset to the labours and industry of the town. The large contract entered into with the Rosyth Naval Base contractors has been undertaken in addition to the usual business of the company of supplying unlimited quantities of sand to customers all over the country. The proprietor. Mr Fred Graham Yooll has now been approached by an American firm with a view, as already said, to their starting a sand brick factory, and we understand there is a probability of agreement being made. In the present state of the trade in the burgh, the news will be hailed by the working people of Kinghorn, which has not yet recovered from the effects of the closing of the Abden Shipbuilding Yard a year ago.

Below – 1913 – The brickworks must have been situated in this area somewhere. 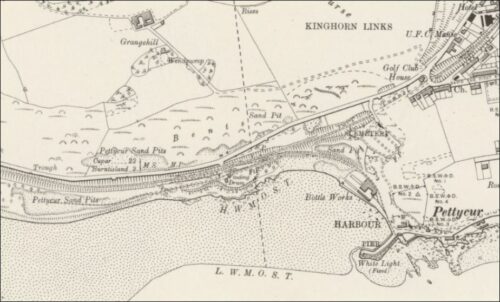