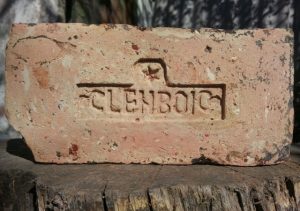 Many thanks to Vladimir Smirnov for the following information.

This brick is in the possession of Grisha? and believed to have been found in the Donetsk region of Ukraine.

Both Vladimir and I believe this to be a forgery of a Glenboig, Scotland brick.  Glenboig bricks were renowned throughout the world for their quality and reliability as a firebrick. It comes as no real surprise that someone somewhere would try and forge the brickmark to pass it off as the genuine article.

Vladimir states ‘the first letter is a “C” instead of “G” and of course “N” is simply reverse Russian “И”. 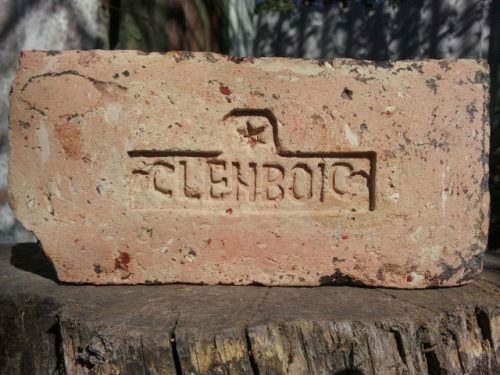 A c.1913 Glenboig Union Fireclay catalogue states – The fame attained by the Glenboig brands has led to some dishonest imitations by makers of inferior goods. The word Glenboig which is our trademark and trade name is used in various ways by the parties referred to, who also imitate the form of our stamps and purposely stamp indistinctly. We would, therefore, warn buyers, when not buying directly from the Glenboig Union Fireclay Limited, to make sure that one or other of the brands shown at page 9 is clearly impressed upon the goods and not to be satisfied by any other use of the name Glenboig.

The Scottish Refractory Industry 1830 – 1980 book by Kenneth W Sanderson states with regards the section on the Glenboig Union Fireclay Company “… Reports were received that firebricks made in Germany and shipped from Hamburg and Antwerp to the Black Sea ports were branded with Russian characters which translate phonetically as ‘Glenboi’. Customers in Southern Russia were circulated to warn them of this attempt to mislead them”