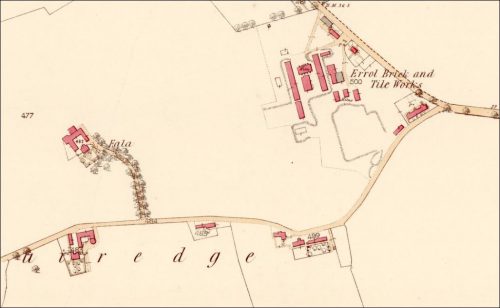 03/07/1880 – Dundee Peoples Journal – Megginch Pottery, Errol -Several years ago Mr James Gentle, builder, Dundee, purchased the small estate of Falla, near Errol, on which there had been a brick and tile work on a small scale since 1842. Messrs James Adamson & Co., coal, brick, lime, and cement merchants, Dundee, secured a lease of the works shortly after the purchase by Mr Gentle, and ever since have been adding to and improving them.  The most of the land, extending to upwards of 60 acres, is a very fine clay, with a depth of from 7 to 26 feet.  At present only fourteen acres are occupied, but there is ample opportunity for extension.  Previous to Messrs Adamson’s tenancy all the branches of brick and tile making were carried on by hand labour.  This is now a thing of the past, steam power having been introduced.  Instead of making bricks by hand they are produced by a powerful horizontal machine, with large crushing rollers to break up any stones that may be in the clay.  The delivery is nine bricks at a time.  The clay passes from the die in a continual stream, is cut into lengths, ad run over rollers on to a cutting table, and the nine bricks are delivered on a board ready for removal.  This machine makes from fifteen to twenty thousand bricks per day.  Large pipes for leading drains, from 4 to 14 inches diameter, are manufactured by one of Ainsley’s patent per-perpendicular machines, capable of turning out 1800 of the largest size per day.  The smaller sizes of drain tiles are also made by steam-power, and the clay is all subjected to treatment by a powerful pug mill to bring it into a uniformly plastic state.  All the machinery is driven by a very fine 30-horse power horizontal engine.  That nothing should be lost, the firm have carried the exhaust steam into a large drying stove, consisting of two flats, the upper having a sparred floor, the lower being laid with pavements set on brick channels closely jointed.  The steam being forced through these channels, given off a high degree of heat, which pervades the whole stove, and a large quantity of material can be dried daily.  There are six large kilns for brick and tile burning.  The two largest, which are round in shape and built on the Leeds principle, were erected by the lessees.  The firm have now started a new branch of industry.  Satisfied after repeated experiments that their clay is well adapted for the manufacture of brown ware, flower-pots, and the inner class of terra-cotta, they recently established a pottery known as the Megginch Pottery, Errol.  In the connection with the pottery, two kilns-one for the common class of glassed ware, the other for gilding and hand-painted ware-have been erected, and they are in the course of finishing plungers and other apparatus for refining the clay.  Messrs Adamson & Co employ between forty and fifty hands, ad by the development of the new industry they hope to employ a great many more by-and-by.

The pottery is situated about a quarter of a mile from Inchcoonan’s siding.  To do away with the outlay for cartage, the firm laid down rails connecting the works with the mainline, and it is gratifying to know that the Caledonian Railway have under their consideration the desirability of providing accommodation for passengers at Inchcoonans.  Plans are being prepared for supplying this want, which has been long felt by the population of the may villages in the neighbourhood.  By the opening of a station the beautiful estates of Megginch, Errol Park, and Murie would be rendered more accessible, ad the practice of joining the railway at Glencarne instead of Errol, which is not uncommon with many of the inhabitants, would cease.  Now that the matter had advanced so far, it is hoped only a short time will elapse and the station is opened.

Below – 22/08/1924 – Dundee Courier – All parties having claims against the late A.B Fraser, brick manufacturer of Fala, Errol and of Wester Tullyfergus, Alyth are requested to lodge the same with the subscriber as agent for the deceased’s trustees within 14 days from this date and all parties indebted to the said deceased are requested to make payment within the like period. J.A Carnegie, Solicitor, Kirriemuir.   14/08/1924 – Note: the brick manufacturing business is being carried on as usual and all communications as to orders etc should be addressed to Mr William Johnstone, The Brickworks, Errol, Perthshire. 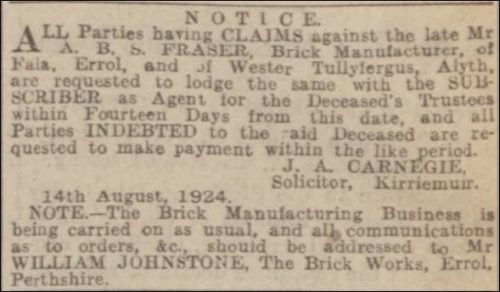