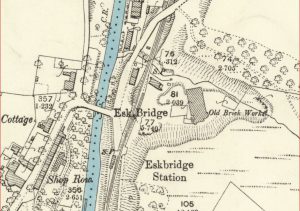 1852 – The Esk Bridge Brickworks site was a quarry.

1864 – John Dennis & Co established from headed notepaper but he is described as a bricklayer, furnace builder and contractor – no reference to the brick manufacture at this time.

26/04/1879 – Peebleshire Advertiser – On Saturday afternoon while John Tynbee was engaged working a brick making machine at Eskbridge Brickworks his hand was drawn in and so mutilated as to necessitate its amputation, which was satisfactorily performed in the Royal Infirmary, whither he was removed. 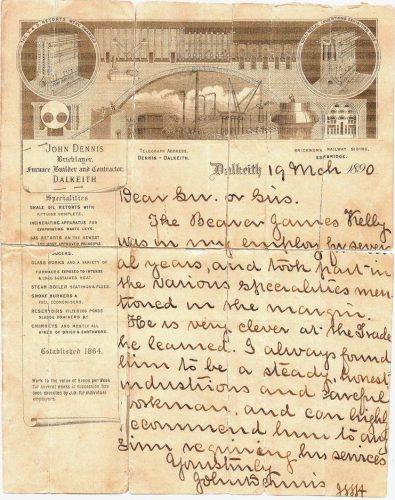 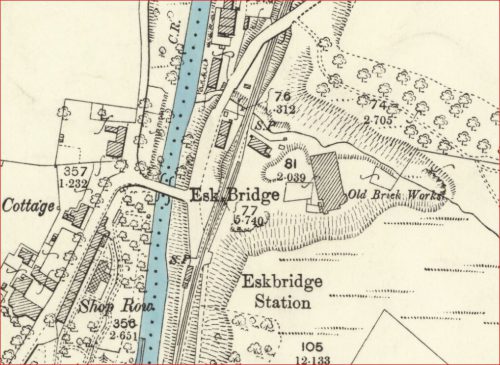 1901 – John Dennis and Co incorporated into a limited company. 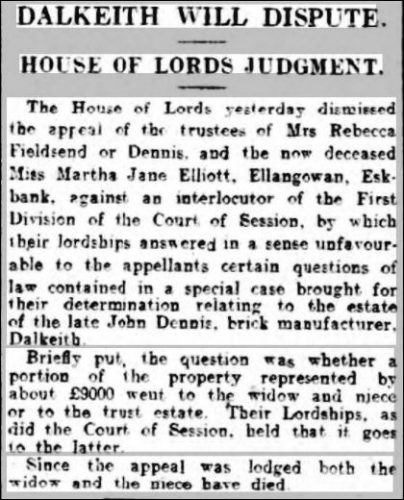 The letterhead of John Dennis, Midlothian’s super-efficient bricklayer-contractor in the 1880s and 90s. The company he founded continues to this day. With his younger brother Cammack Dennis’s companion business in Bury, Lancashire, the two contractors specialised in chimneys, retorts, furnaces and boilerhouses, working rapidly with teams of bricklayers hired-in by press adverts from all over the British Isles. The John Dennis letterhead shows some of his best-known work: Y&B (Young & Beilby) retort benches and the elegant stalks of Dennis corniced chimneys.   Many of them were to grace the papermills up and down the Esk Valley.   The Dennis brothers original surname was Murphy and they came from a chimney-sweeps family at Navenby in Lincolnshire. The 1861 census records Cammack Murphy as a 13-year-old chimney sweep in the village: John Dennis Murphy was already away from Navenby seeking his fortune elsewhere.   Tradition has it that John Dennis arrived at Leith in the 1860s with just a bricklayer’s trowel, and the business started from there. John Dennis’s associates in his Scottish enterprise were his site organiser Downie Brown and his Eskbank Penicuik brick and tile works manager John Toynbee, a brother-in-law from Navenby. These Lincolnshire Toynbees were distantly related to the well known historian/journalist family. Alice Toynbee laid the foundation of Penicuik’s Salvation Army Hall. Other Dennis buildings were probably Penicuik Post Office (now Pen y Coe Press), Clippens Oil Co Headquarters (at Straiton Sainsbury Roundabout), Glenkinchie Distillery, as well as miners housing all over the Lothians.   John Dennis worked closely with oil and gas engineer and retort designer William Young, the two men were said to have been served dinner on top of a Dennis-built chimney or retort.   John Dennis construction teams were active as far afield as France, Australia and Ukraine in the company’s early days.

Adapting an earlier structure, John Dennis built himself an elaborate brick-and-stucco mansion in the 1880s. Called Brixwold to acknowledge his Lincolnshire roots, it lies east of Bonnyrigg on the road to Dalhousie Castle. Four stations away from his brickworks at Eskbridge and convenient for the company’s Dalkeith yard,   John Dennis lived there with his wife, Rebecca Fieldsend, mother, Sarah Machin, and niece Martha Jane Elliot.   John Dennis died in 1912 and his Toynbee relatives inherited the business.  Extended with a porch and outbuildings in recent years, Brixwold has been described as an 18th century or even medieval building and sometimes known as Dalhousie Courte. 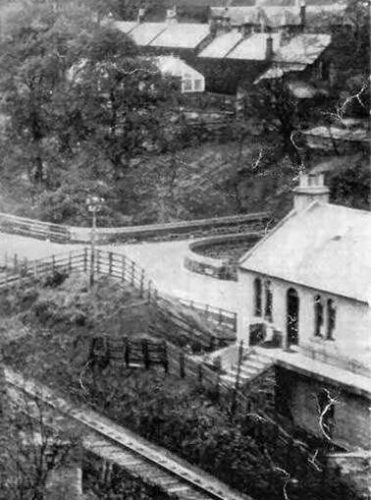 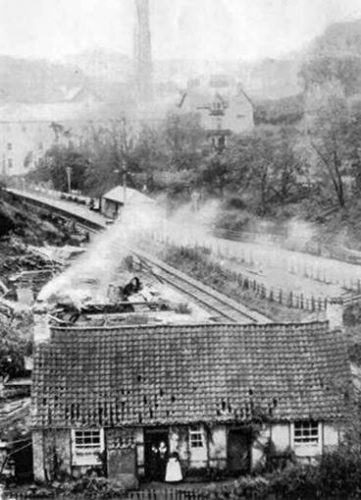