1888 – The Eglinton Chemical Company, Limited, 27, St. Vincent Place, Glasgow. This has proved one of the most successful, as it is one of the most enterprising, concerns in the Scottish chemical trade. Founded about seventeen years ago to engage in the bichrome industry, it has developed in various directions since; but these directions have been in the line of making the most of its natural resources, and utilising its by-products and waste materials.

While its head offices are situated in St. Vincent Place, its chief works, with which connection is maintained by telephone, are located at Irvine, about thirty miles distant, which was, we believe, originally selected as a fitting site owing to the low agricultural value of the ground there and its proximity to a good harbour and the mainline of the Glasgow and South Western Railway. These works have been enlarged from time to time, and now constitute an extensive manufacturing centre devoted to the production on a considerable scale of bichromate of potash, patent bichromate of soda, and bleaching powder, with such other chemicals as are incidental to the production of these — such as sulphuric and muriatic acids and sulphates of potash and soda.

The ground covered by the works and used for the deposit of waste extends to about one hundred acres. We understand that arrangements have been made to include in the products of the establishment such other chrome salts as may be wanted by consumers, such as chromic acid, chromate and bichromate of ammonia, lime, &c., &c. In addition to the Irvine business, the Company now control five other important works, forming, as has been already indicated, the development to some extent and the result in a large measure of constant research during the management of the general business since its origination.

The first acquisition consisted in the Glenarm limestone field, with its large quarries all along the coast of the county of Antrim, from Lame northwards for about fifty miles to Ballintoy, served by the harbour of Glenarm, about seven acres in extent, the absolute property of the Company, and another at Ballintoy held under lease. In this business, they have three steamers of their own employed (in addition to steamers and sailers chartered from time to time), viz. Eglinton, Glenlut, and Glenarm — the latter the crack steamer of its size for carrying capacity, speed and equipment, in the coasting service. The exports consist of limestone and whiting, of which the Company are the largest shippers from Ireland, with lime shells and paving setts, the latter being made from a hard rock found adjacent to their limestone quarries; and Iron bauxite — now so largely used all over the world in the manufacture of alum, and which they were the first, through their managers, to discover in Ireland and to supply for this purpose. It has been found quite practicable, we understand, to ship as much as four thousand tons per week from these harbours, steamers being loaded there at the rate of one hundred tons per hour. The limestone is of very fine quality, containing about 98 per cent, of carbonate, while the bauxite, when deprived of its water of combination, analyses up to 70 per cent, of aluma and from 1 to 2 per cent, of iron.

The next manufactory in point of importance is their brickworks at Dundyvan, Coatbridge, in the very centre of the Scotch steel trade, where the flints obtained embedded in limestone at their Irish quarries, and bauxite brought from the same quarter, together with chrome ore such as is used at their Irvine works, are made into silica under processes patented by their manager, bauxite and chrome ore bricks respectively for lining Siemen’s, Martin’s steel furnaces, copper and gas furnaces, Bessemer’s converters, and for other metallurgical purposes. The flint bricks have already been largely adopted by the steelmakers to the exclusion of the Welsh Dinas bricks, which previously held the chief position in the estimation of the trade.

30/05/1888 – Glasgow Herald – Glasgow International Exhibition – The Eglinton Chemical Company Limited show a number of novel forms of bricks in a neat showcase. The silica bricks shown are made from pure flint found embedded in limestone in their quarries in Ireland. These bricks are now largely used where the Welsh bricks were used before and are sent in considerable quantities to the North of England, Italy, Sweden and other places abroad. A brick made from a rich chrome ore, and a bauxite obtained from the mines in County Antrim, both patented by Mr Donald, Manager of the company, are also shown, the former being suitable for resisting greater heats than the silica bricks and the latter being intended for blocks of steel furnaces and any other use where the bricks are exposed to the possibility of contact with metals. These bricks were first shown at the Mining Exhibition and have since been shown at the Edinburgh Exhibition, medals of merit having been granted on both occasions. 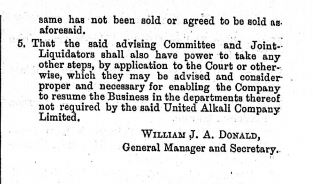 1892 – SS Eglinton – A Coaster for general cargo built in 1892 for the Eglinton Chemical Company – 22/01/1902 sailed from Sunderland for Inverness with coal, posted missing. Wreck site details.

Below – 09/12/1899 – Eglinton Chemical Company – Front page of a supervision order for winding up the company. 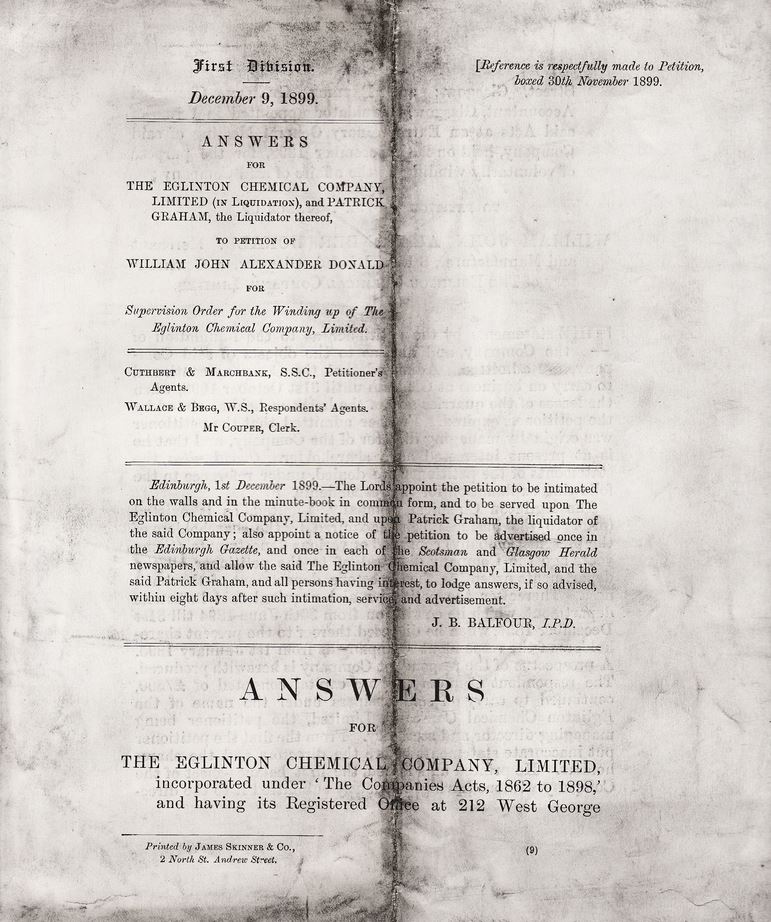 13/12/1899 – Glasgow Herald – The Eglinton Chemical Company Limited (In liquidation) and Patrick Graham, the Liquidator have lodged answers to the petition of W.J.A Donald … The Eglinton Chemical Company Limited as it existed (prior to the business being acquired by the shareholders of the present company) consisted of various departments … In a corrected balance sheet it appeared that the petitioner was a debtor of the Company to the extent of £4351 15s 11d, and that 2 Companies carried on by him, Firhill Lime and Whiting Company Limited and the Eglinton Silica Brick Company Limited, of which Companies he was practically sole owner, were debtors to the respondents to the extent of £876 11s 2d …

23/01/1900 – Edinburgh Evening News – A litigious Glasgow Company – In the court of session today, Lord Kincairney closed the record in 3 actions at the instance of the Eglinton Chemical Company Limited. 212 George Street, Glasgow … the 3rd action is against the Eglinton Silica Brick Company Limited, 8 Firhill Road, Glasgow and concludes payment of £921 with interest. It is stated by the pursuers that they have for years past supplied the defenders with calcined flints and cleaning waggons and that the sum sued for is the balance still due to account …

The Company’s other works are of less importance, their Firhill Works in Glasgow forming an auxiliary chiefly to the Glenarm whiting works, but including in their operations the grinding of flint and Cornish stone for use in the Potteries, and their tannery in Glebe Street, also in the city, being devoted to the working out of a process of tanning leather by means of bichromates, the Company’s staple article of production, and which is expected to become of considerable importance as the supply of bark for tanning purposes is becoming less easy to be obtained.

We need hardly add that the directors are manufacturers and merchants of great experience as well as large capitalists, as may be judged by the enterprise and success which have characterised the career of the Company. The general manager and secretary is W. J. A. Donald, who has been associated with the Company as secretary and manager since its first inception. 1920 – The Eglinton Silica Brick Co., Ltd. 45, Renfield Street, Glasgow. The silica-brick trade in Scotland was started by the Eglinton Chemical Co., of which the present company was originally a branch, about the year 1876, for the supply of silica bricks to Scottish Steel Works. The raw material at first employed was flint from County Antrim, Ireland. Later, chalk flints were imported from the Thames and, to a certain extent, from the northern shores of France. The Thames flints could at one time be bought at 5s. to 6s. per ton c.i.f. Grangemouth. These flints were calcined in shaft kilns, and each kind had different characteristics; the French flints, while purer chemically, were low in fusion point. The bonding material was highly plastic clay obtained from South Wales. The bricks were moulded by hand machines, which, until recently, were exclusively used in this country for moulding silica bricks; these have now been superseded by power presses, which are doing just as satisfactory work as that done in the past by manual labour. After being dried, silica bricks were burned in Beehive kilns, at a temperature of about 1400° C. These flint bricks contained about 93 per cent, silica, the balance being alumina, lime and iron. They were chiefly used in the chequers of steel furnaces, where they would stand better than the best English bricks. They were, however, used also in the crowns of steel furnaces in several works in Scotland, as well as in other parts. One great advantage of these bricks consisted in their less expansion than other silica-bricks, and they were, therefore, better able to withstand variation of temperature without cracking. Also, they could be employed in furnaces for repairs during fettling, and for this purpose alone were in great demand. Until recently little enquiry had been made as to the ganisters used in Scotland, but, judging from the samples that have been hitherto submitted to us there is nothing in this country to compare with the English ganister. There are, however, considerable deposits of quartzite in the islands and west coast of Scotland which have been brought to our notice by the Geological Survey, and which, we believe, could be easily delivered at Glasgow at prices which should enable them to be used for refractory purposes. Quartzites are largely quarried in the United States for the raw materials of silica-brick manufacturers.  Practical tests have been made of the samples submitted, and our opinion is that the deposit -Sample No. 2 (North side of Loch Leven, Ballachulish, 1 mile east of Callart Cottage), might be expected to give the quartzite best fitted for tile manufacture of silica-bricks.  The Eglinton Silica Brick Company is at present (1916) entirely engaged in the manufacture of magnesite bricks from imported material. The above information and report on samples has been kindly supplied by Mr Wm. Donald, Manager of the Eglinton Silica Brick Co.