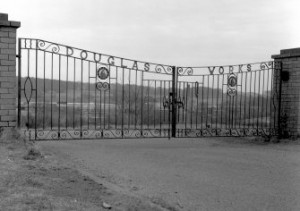 William Douglas, a master blacksmith, and his wife Janet had a son, John, born at Moorhouses, Stevenson, in 1822.  John grew up in the clay industry and became the manager of the Corse-hill Tile Works, Dreghorn, where on 4th May 1855, his eldest child was born. He was named William after his grandfather and was destined later to found the Douglas Firebrick Company. Shortly after his birth, the family moved to Ardeer Tileworks at Stevenson, where his father became the manager. The father died twenty years later, aged 53 years, but his son, now aged twenty, had already left home and was working at Drumchapel Colliery at Duntochar, Dumbartonshire.

William moved to the Glenboig Fireclay works owned by the famous James Dunnachie and here he met and formed a friendship with John Stein which was to last them all their lives.

William’s younger brother, John, also came to work at Glenboig and remained there to become the Works Manager after Dunnachie’s death in 1921, until his own death in 1928.  While at Glenboig, William Douglas became a keen geologist and a member of the Glasgow Geological Society. He made a particular study of the fireclays in Ayrshire and this became easier when he moved about 1892 to become the manager of the freestone quarries and brickworks at Lylestone near Kilwinning. This was a good centre for exploring the Garnock river valley, some two miles to the west, where some fireclay seams were exposed south of Dalry.  Samples were taken and sent to J. T. Norman in London who reported the results in June 1910. This report convinced William that he had founded a commercially workable, highly refractory fireclay.  Later the Geological Survey named these deposits the Douglas Fireclays. Mention has already been made of William and E. M. Anderson of the Geological Survey taking samples of the bauxitic fireclays on the beach at Saltcoats about 1912, so by this time William knew some excellent refractory raw materials and was ready to start up his own business. Perhaps the success of his friend, John Stein, encouraged this course.

A lease of minerals was obtained from Charles Edward Grant of Monkcastle and signed on 19th January 1912.  Fireclay from the lease was made into bricks and burnt in the kilns at Lyle-stone.  So keen were they to see the first bricks from the kiln, that Richmond Douglas recalls his father telling him to ‘Take your bunnet to it’, as the hot brick was extracted from the kiln.  The Kilmarnock bunnet was sacrificed in the process.  The trial was judged satisfactory, and a mine was driven into the seams on Monkcastle estate which lay on the west side of the Garnock river.  There was no access to a railway on that side so a further lease was negotiated with Colonel F. G. Blair of Blair Castle, and signed on 24th January 1914.  Here on the eastern side of the Garnock with access to the Glasgow and South-Western Railway, a works was built and connected to the mine by a mineral railway,  The Douglas Firebrick company was incorporated on 19th August 1914, a few days after the declaration of war with Germany. William Douglas was 59 years old.

The initial share capital was 1,400 £10 shares, of which William received 300 and £560 in cash for the fireclay stock, mine, and buildings, together with a yearly salary of £150. The remaining shares were issued for cash at £2-10-0 (£2.50p) paid up, and various members of the Douglas family subscribed for 500, and the public took up the remaining 600. The first directors were William Douglas, senior and junior, James Black, Robert King, and frank Paterson.

An early link with the Morgan Crucible furnace department was established when Leonard Harvey, the manager, was so impressed with the Douglas firebrick that he ordered a rail wagon of fireclay to be sent to Morgan’s Battersea works. This was followed by an order for 3,000 tons of firebricks on condition that they were fired in a kiln similar to those at Battersea, they entered into further discussions which resulted in a financial agreement signed on 1st March 1918, whereby Morgan became the sole selling agent of the Douglas Firebrick company in the United Kingdom and elsewhere. The Douglas capital was divided into £1 shares, and Morgan subscribed for a further 6,000 new shares making the total capital 320,000. In April 1920, Morgan subscribed for a further 10,000 ordinary shares giving them effective control.

This extra capital was used to bring in a supply of electricity from the grid, and to install semi-plastic brick-making machines to take over much of the hand-making. Two modern tunnel kilns were built in 1935, and two American Boyd dry presses replaced the semi-plastic brick machines. The kilns were fired by producer gas made from anthracite coal in fully mechanised producers.

William Douglas discovered some excellent fire clays and was the last of the Scottish entrepreneurs to set up his own business, at the relatively late and difficult time of 1914.  He suffered from the usual lack of sufficient capital to expand it early on and had to turn to Morgan Crucible who supplied it and took effective control. Both parties benefited and the co-operation worked well, but it would not have suited the temperaments of James Dunnachie or John Stein.

The VIIth International Ceramic Congress was held in Britain in 1960, and on 24th May the members visited the Douglas Works at Dalry. A small descriptive booklet was issued for the occasion describing the various Douglas firebrick brands, and the high alumina Triangle brands based on calcined bauxite from Guyana, and the local bauxitic fireclays from high Smith-stone mine, and the Langside mine at Galston. The bauxitic clays were calcined in a shaft kiln with a capacity of about 3,000 tons a year, while firebricks amounted to about 25,000 tons a year. A most profitable range of refractory cements and castables added another 7,000 tons a year.

In 1917, William Douglas from Douglas Firebrick Company helped form the Scottish Employers Council for the Clay Industries. William Douglas died in 1937, aged 82 years. His son, Richmond, had seen the company grow from the first beginnings and had led it ably through the depression of the 1930s until his own retrial in February 1970. Richmond was in turn President of the Scottish Employers’ Council for the Clay Industries, the National Federation of Clay Industries, and the British Ceramic Society. He was a man of great charm and always ready to help a young man with advice. He died on 7th September 1980, aged 89 years.

Richmond’s nephew, William Douglas, a grandson of the Founder, served as a director and works manager after the 1939-45 war. Robert Kerr was the company secretary, and Ian Tulloch, the sales director. Ian Tulloch started at Morgan’s Neston Works and came to Dalry in 1960 to build up the Douglas’ own sales force, which helped to retain orders in the years of declining demand.  Morgan sold the Douglas Company to A. P. Green Refractories in 1970, but the continuing decline in orders forced the closure of the Monkcastle Mine and the works in 1982. The works are now a mushroom farm!

Ardeer Brick and Tile Works – Stevenson – Merry & Cunningham (Cuninghame) started the Ardeer Ironworks about 1850, and the brickworks which was on the north-west side of the Ironworks was working prior to 1855 when John Douglas became the manager.  Hunt’s Mineral Statistics of 1858 states that the brickworks produced about 800 tons a year of taphole clay for blast-furnaces. No doubt they also produced some firebricks as kilns are shown on the site.

22/07/1941 – The Scotsman – At Kilmarnock Sheriff Court yesterday,  William John Cox, 83 New Street, Dairy, Ayrshire, pleaded guilty to a charge of having, in “the factory occupied by Douglas Firebrick Co Ltd, Brick manufacturers, Battersea Works, Dalry, failed to comply with the provisions of the Factory Act, 1937, in respect that a dangerous part of a machine was not securely fenced. An Inspector of Factories stated that the charge was brought against an employee and not against the occupiers of the factory because she was satisfied that they had used all due diligence to enforce the Act. She had been instructed to bring this case before the Court so that it might be brought to the notice of workers that they too had obligations and not merely the factory occupiers. Her department had no desire to press for a penalty other than the payment of the expenses of 27 s 3 d. So far as the offence was concerned, the machine in question was used for shaping and pressing bricks. In order to change the dies Cox had put out of action the automatic guards and had omitted to replace them, with the result that a 15-years-old boy had his hand injured in the machine. An agent stated that Cox had been suspended for two days by his employers as a penalty for his action. Sheriff Martin Laing ordered the accused to pay the expenses of 27 s 3 d. The alternative being 14 days imprisonment. 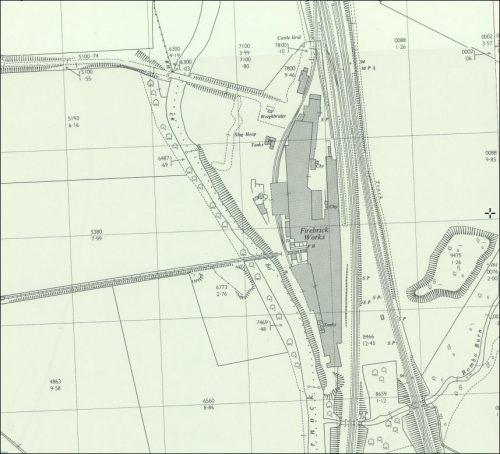 1947 – The Douglas Firebrick Company were utilising 50% of the clay mined from the Whiterigg Fireclay Mine, East Whitburn. This was owned by James Dougall and Sons, Bonnybridge.

1953 – The Douglas Firebrick Company sold their 50% share of the clay mine at Whiterigg Fireclay Mine, East Whitburn.

1960’s – 1970 – The 1985 publication ‘A survey of Scottish brickmarks’ suggests that the Morgan Crucible Group owned the works during this time. 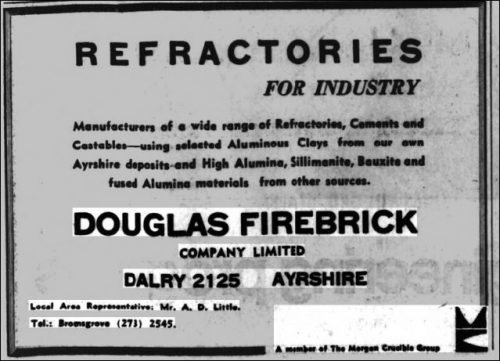 1981 – Monkcastle Mine closes – Douglas Works used local fireclay mined from Langside at Galston, Smithstone at Kilwinning and Monkcastle, which was the last of these local mines to supply fireclay to the works. After Monkcastle stopped supplying the works in 1981, raw materials for production had to be brought in until the works closed in 1982

Below – The following photographs were forwarded by Martin Sneddon and are believed to be of the Douglas fireclay works. The date is unknown but it appears they were taken after production finished. 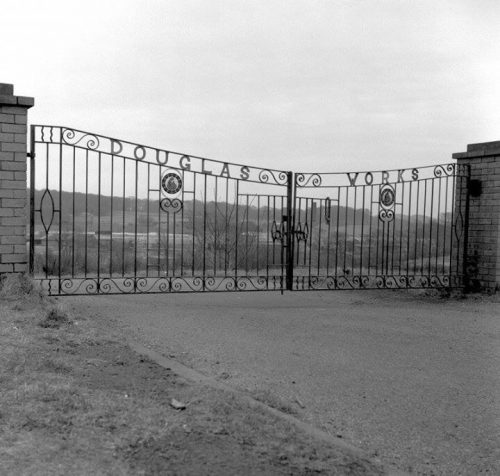 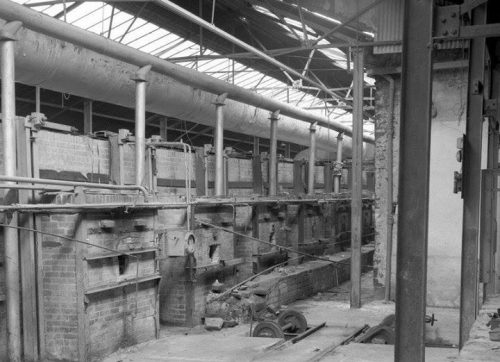 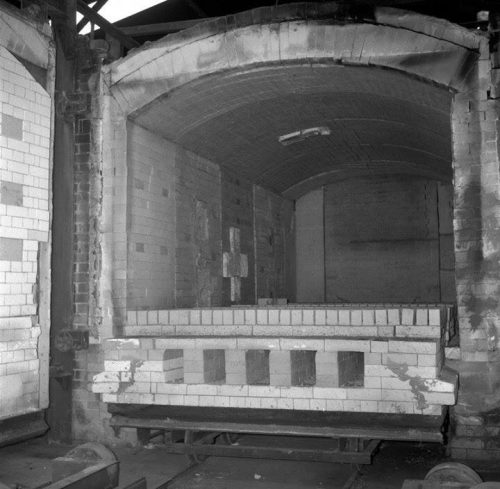 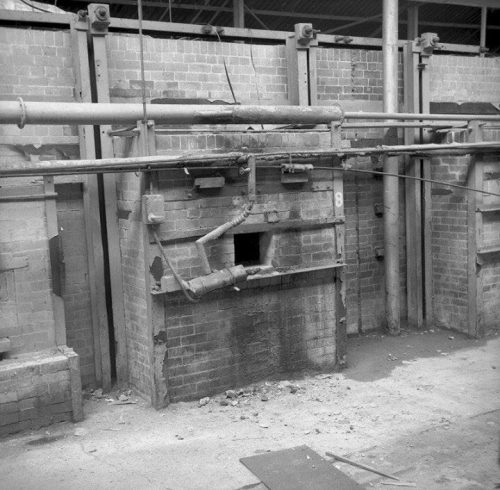 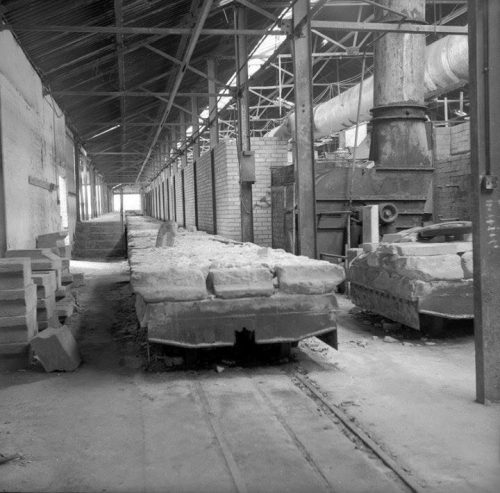 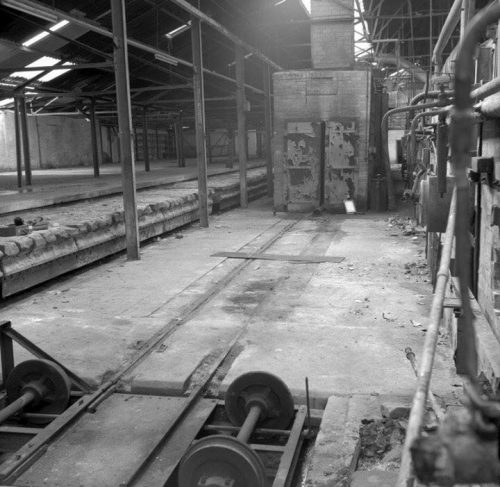 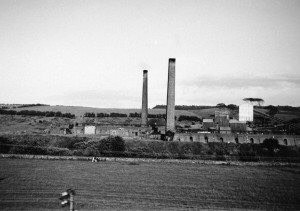 Video of the area around the Douglas Fireclay Works and the High Monkcastle Fireclay Mine – Source Roger Griffith, Youtube Video.

Below – Could this firebrick found in Barrow In Furness, Cumbria by Richard Comish, be a Doulas product. It is stamped with a triangle (Note – SBH – It could be a > mark also).

“The VIIth International Ceramic Congress was held in Britain in 1960, and on 24th May the members visited the Douglas Works at Dalry. A small descriptive booklet was issued for the occasion describing the various Douglas firebrick brands, and the high alumina Triangle brands based on calcined bauxite from Guyana, and the local bauxitic fireclays from high Smith-stone mine, and the Langside mine at Galston. The bauxitic clays were calcined in a shaft kiln with a capacity of about 3,000 tons a year, while firebricks amounted to about 25,000 tons a year. A most profitable range of refractory cements and castables added another 7,000 tons a year” 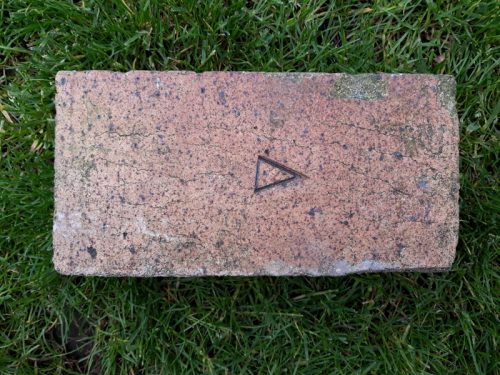 Below – This broken and worn brick was found by Tamsin Stirling on Splott Beach aka the Foreshore, SE Cardiff, Wales. The stamp appears to say ‘Douglas’ on the top line then ‘EP 3’ and then possibly ‘Patent Douglas’.  This may be a product of the Douglas Fireclay Works so I have recorded it here meantime. This is not in my possession. 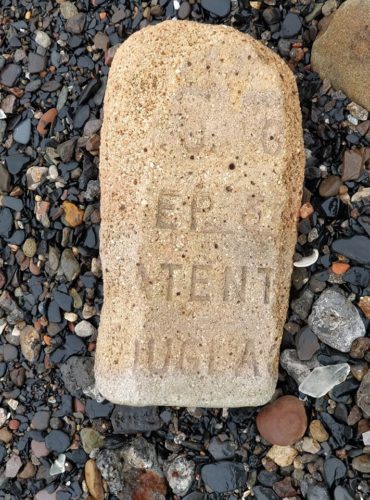