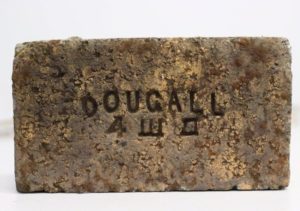 Thank you to Olga Kubareva for forwarding photos and information on this brick. Olga is a director of the Museum and Exhibition Center of the KB JSC “Apatit” in the city of Kirovsk, Murmansk region, Russia.

On a survey of an old mine in the Khibiny Mountains, several Dougall stamped bricks were found. The mine operated from c. 1930 to 1939.

The buildings around the mine were later crushed by avalanches.

One of the Dougall bricks found by Grigoriy Ilin, also bore the Russian lettering “4 щ д” 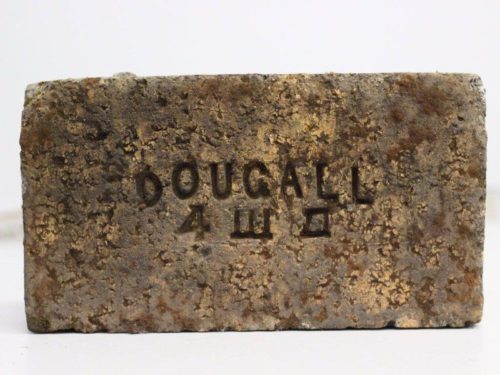 The following information from Vladimir Smirnov, St Petersburg, is believed to be relevant to the above brickmark.

Letters Ш and Д at Russian firebricks means Shamot (Fireclay) and Dinas type (not less than 93% silicon dioxide (silica)). I have no idea how two alphabets appeared at one brickmark and which of them can indicate the origin of the sample.

So was this firebrick manufactured at Bonnyside, Scotland by James Dougall and also stamped with Russian cryllic lettering denoting that it is a Dinas fireclay brick. ( Note – SBH – I have not seen reference of Dougall specifically using Dinas fireclay, but ganister fireclay is associated with Dinas fireclay and certainly Dougalls manufactured bricks from ganister).