Chapter Five  – Brick and Field drain Works – Written by Eric Flack and reproduced by kind permission.  It is a fascinating read.

Another local industry was the manufacture of bricks. Three of the local brickwork’s produced terracotta type bricks and field tiles or drains in updraught kilns from locally dug red clay. These were Horn’s which was located at the Elderslie Dry-dock at the foot of the Dyke Road and the Garscadden Brick and Tile Works, which was owned by Horn’s and latterly by Stevenson Brothers. This was located on the opposite side of the canal from Keal Drive and Avenue and had an extensive pit from which red clay was dug and then pushed by hand into wooden or metal boxes to make terracotta type bricks in updraught kilns. They also had a clay pit on the left side of Garscadden Road towards Great Western Road. In the 1860 Ordnance Survey name book for New Kirkpatrick, it notes the following. “Blairdardie Brick and Tile Works. Robert Horn, brick keeper. This place has been used for making bricks and tiles for about 20 years. It is of a permanent nature. It belongs to Garscadden Estate the property of Mr Colquhoun of Killermont”.

Terracotta bricks are considered superior to the traditional Scottish brick due to the firing process producing higher temperatures, which produced good weather resistance. The Garscadden Brickworks latterly used coal from the Baljaffrey Pit in Bearsden, which closed in 1910. These bricks are marked “Horns” and then “Stevenson Bros Drumchapel. Glasgow”.

Stevenson’s Garscadden Brickworks closed in 1916 when the red clay deposits become exhausted. The clay pit was used as a refuse coup by Clydebank Town Council with a small fee for each load couped being paid to Garscadden Estate.

Thomas Gilmore whose father ran the Kilchattan Brick and Tile Works on Bute opened the Drumchapel Brickworks. He paid a lease of £60 per year to the Cowdenhill estate. This lease was terminated on Whitsunday 1906 due to most of the suitable brick making material being used up. It operated between Essenside Avenue and the railway next to Drumchapel No 2 colliery. This brickwork used red plastic clay dug out of the ground at this location to produce field drains (field tiles) and terracotta bricks in an updraught kiln. After Thomas Gilmour gave up the lease the brickworks were re-opened for a short time by Kings. It is understood that the manager was killed when a railway wagon door, which he was opening, fell on him. The works shut soon after this. Gilmours bricks are marked “G & G Glasgow”. Other smaller brickworks exploiting the red clay were Hutton’s Brickfield run by William Hutton in 1881 and Cloberhill Brickfield. Both of these were located on the south bank of the canal between the Bard Avenue bridge and the bridge at Blairdardie Road.

Below – 1894 – Cloberhill Brickfield was likely situated somewhere on this map. Probably just East of the Garscadden Brickworks but it appears to have been disused by 1896. 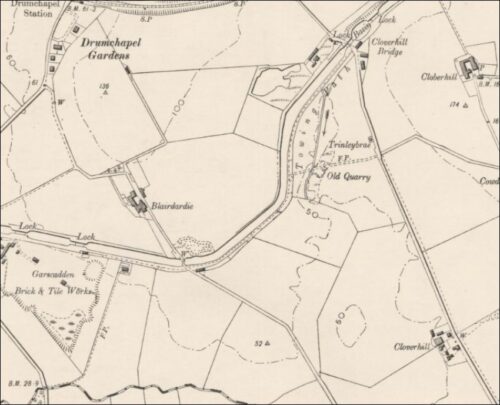 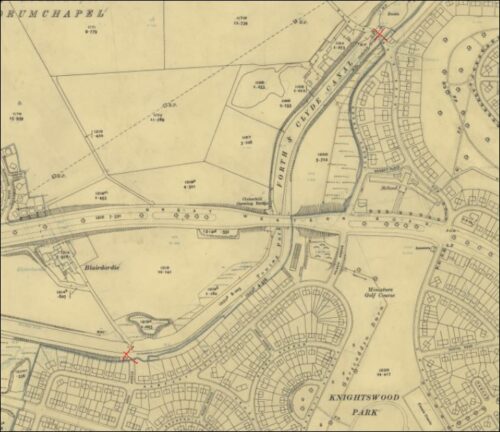