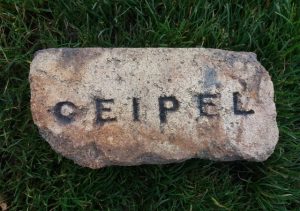 (Is it Ceipel or Geipel).

Arthur Brickman comments: Similar bricks appear on Tyneside and I believe them to be of Dutch manufacture. In the early 1900s, a German patented Coal to Oil plant with associated Coking Ovens was built at Blaydon on the Tyne, in the vicinity of the Cowen Brickworks, which was then owned by Priestman Collieries. Known locally as ‘Ottovale’, a reference to the project appears in a 1902 edition of the ‘Pottery Trades Gazette’, bemoaning the fact that despite Tyneside had an abundance of quality firebrick manufacturers, the contract stipulated that some 500,000 bricks would be imported from the Netherlands for all it’s refractory requirements. It would appear to be another case of Coals to Newcastle! 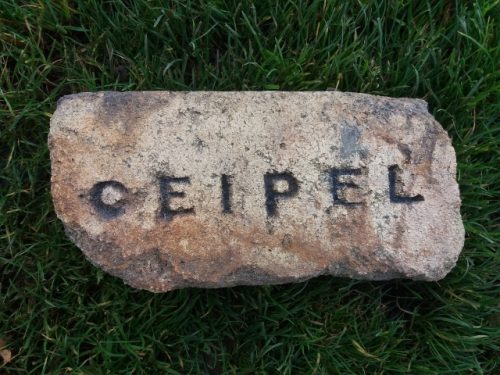 Below – A fellow collector has evidence of a similar brick being found at St. Petersburg. This appears to suggest that the name may be Ceipel and Co as the 2 x ‘C’s look alike. 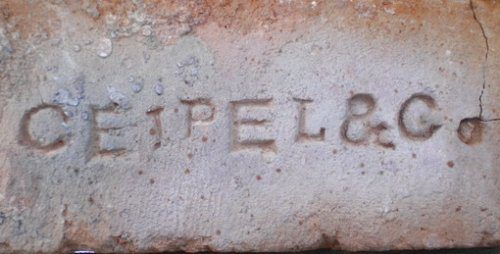 06/03/2020 – Update. I am now believing that this stamp is Geipel and not Ceipel for the following reasons.

These bricks are either found in and about the NE of England, especially the Newcastle area. At least one has been found abroad in the St Petersburg area.

I believe these are bricks manufactured in the Newcastle/Durham area for a firm or merchants called Geipel and Co and the bricks were stamped with the merchant’s name. They appear to have operated from the NE England area and were merchants in coal and timber as well as fire bricks, lead, rosin, copperas, bleaching powder, alkali, linen, anchors and chains, tar, iron and potatoes etc. They seem to have been prolific exporters, in particular, to Europe and the Baltic Ports.

14/01/1873 –  The London Gazette  – Notice is hereby given, that the partnership heretofore subsisting between George Geipel, of Sheriffhill, in the county of Durham, Broder William Geipel, (Note  – SBH – I suspect this should be William Broder Geipel) of Old Hartlepool, in the same county, and Adolph Mau, of Gateshead in the same county, carrying on business at Newcastle-upon-Tyne, and at West Hartlepool, in the county of Durham, as Merchants and Brokers, under the style or firm of Geipel and Co., has this day been dissolved by mutual consent.—Dated this 7th day of January 1873. Geo. Geipel. Br. Wm. Geipel. Adolph Mau.

(Note – SBH – I believe this is the same family, some of whom moved from the NE and set up business in London. Graces Guide).