The Carron Company was an ironworks on the banks of the River Carron near Falkirk, in Stirlingshire.

The factory of Roebuck, Garbett and Cadell was established on the north bank of Carron Water, two miles north of Falkirk. Taking iron ore from Bo’ness and water from the Carron, they decided to use the new method pioneered by Abraham Darby at the Coalbrookdale Co, using coke from coal mines in the vicinity as fuel rather than the usual charcoal. The works helped to push other less technologically advanced ironworks, such as the Wealden iron industry based in the Weald, out of business.

Caddell’s young son, also William Cadell, Junior, was appointed manager, and the company’s financial position was precarious in its first few years. It took time and a considerable investment to create the necessary infrastructure and for the largely unskilled workforce to develop the techniques of ironworking.

The Articles of Copartnership included an agreement to take over the leases of mills at Craigforth on the Forth above Stirling, on the Avon, Carron and Crammond (or Almond) rivers, and also to lease or buy the woods of Callendar, Leny, Cowbank, Newred, Northwood and Tinnochside. In addition there was included in the Articles a contract, dated 13th December 1759, to feu fourteen acres from Sir Michael Bruce of Stenhouse for a site for the principal works on Carron Water; and a contract for ironstone on the lands of the Earl of Errol and for coal on the estate of Thomas Dundas of Quarrole (Carton Hall). Curiously enough, although a lease of land for the site of the blast furnaces was taken, the partners, even in the beginning of the new year, were uncertain whether the works should be built there or not; for on 12th February 1760, Roebuck wrote to Cadell, “It will perhaps be most advantageous to erect the first furnace on the Avon or near Stirling.” Very soon after this, it must have been finally decided to build the blast furnaces at Carron, and building operations were soon in full swing.

1760 – Built an air furnace. Probably two of these furnaces were lighted early in 1760. They were certainly in full operation in March of that year, and the products, cannonball, sad irons, and hoops were being sold in the London market by Thomas Roebuck and Co. But Garbett seemed to get small satisfaction from these early sales. ‘Our reputation at setting out is of great importance,’ he writes. ‘All goods cast at air furnaces are brittle and of a very different quality to what is cast from the blast furnace at the Dale; it is for this reason I wish you would not permit anything to be cast at the air furnace that can possibly injure our characters, which will suffer if we make anyone thing inferior in any respect to what is cast at the Dale; this I should make a point of and I hope we shall have the first reputation for the quality of our goods.’ [1]

1760 – The hearth stones, a shaft for the water wheel, the boards and leather for the bellows and the necessary iron plates for a furnace were ordered in July 1759, and it was hoped to have them shipped from Bristol by the end of August. But these hopes were not to be fulfilled. The materials which had been purchased could not be sent down the Severn on account of the drought while the greatest difficulty was experienced in securing a tree of sufficient dimensions for the axle shaft, though, three men had been employed nearly two months to look out and purchase them. By the beginning of October Garbett was able to announce that he had at last secured the shaft and the other necessary timber, though the former which they hoped would have been 27 feet long and 30 inches in diameter, fell short of these requirements. The goods were probably despatched from Bristol in the same month, but the ship was lost at sea, and so all the labour of Garbett went in vain; and in March 1760, a man was sent to Yorkshire to procure another set of bellows boards. In the meantime, other materials were purchased – 20,000 Stourbridge bricks, 100 tons Stourbridge clay, 20 tons pig iron from Coalbrookdale, 30 tons of the best pig iron from Madeley Wood, and 10 tons of timber. These goods were sent down the Severn from Bewdley and shipped from Bristol in February. Further supplies of timber were purchased in Yorkshire, and these with pots for making bricks, baskets, shovels, etc., were despatched from Hull. More timber and iron were obtained in Norway and from Gothenburg. [2]

26/12/1760 – The first blast furnace became operational and producing pig iron. However, when the factory started to produce cast iron goods, they were of generally poor quality.

1761 – October. Advertisement. Carron Company supply cylinders, pipes and all types of cast iron and brass work of any dimension for fire and water engines [4]

1762 – Some issues between the local people and the Carron Company. A notice of the companies position published and signed by Napier, J.P., Mich. Bruce, J.P. and Thomas Dundas [5]

1764 The Board of Ordnance granted the company a lucrative contract to supply armaments to the British armed forces.

1765 – The company’s fortunes had begun to improve as a result of Charles Gascoigne becoming a partner. Gascoigne was a grandson of Charles Elphinstone, 9th Lord Elphinstone and had married Samuel Garbett’s daughter in 1759. Gascoigne introduced many improvements in the company’s techniques of production and devoted considerable effort to increase the quality of its work.

1766 – Trial. The Carron Co (Messrs Roebuck, Garbett and Cadell) against Robert Crosswell and James Chrystie previously of Montrose but lately of Gottenberg, Sweden for enticing their employees away [6]

1769 – ‘The Carron Company having been lately spoken of, the following short account of the institution and progress of it, from Mr Pennant’s Tour in Scotland, in the year 1769, may not be disagreeable to our readers. ‘The Carron Iron-works lie about a mile from Falkirk, and are the greatest of the kind in Europe: They were founded about 8 years ago, before which there was not a single house, and the country a meer moor. At present, (1769) the buildings of all sorts are of vast extent, and above 1200 men are employed. The iron is smelted from the stone, then cast into cannon, pots, and all forts of utensils made in founderies. This work has been of great service to the country, by teaching the people industry, and a method of setting about any sort of labour, which before the common people had scarce any notion of. Carron Wharf lies on the Forth, and is not only useful to the works but of great service even to Glasgow as considerable quantities of goods destined for that city are landed there. The canal likewise begins in this neighbourhood, which, when effected, will prove another benefit to there works.’ [7]

1769 – Charles Gascoigne took over the management of the works from William Cadell, Junior

1771 – October. Ebenezer Roebuck of London and a partner in the company (the brother of John Roebuck) was killed at the works in an accident. [8]

1773 – The company received a royal charter to incorporate as the Carron Company. By this time, the company was a major manufacturer of guns. The dozen people who owned the company were three Cadells, two Garbetts, John Adam, Ralph Lodge, John Minyer, Ambrose Tibbetts, James Balfour, John Gascoigne and Benjamin Roebuck. [10]

1773 – Despite Gascoigne’s efforts, the quality of company’s products had remained low, and the company’s contracts to supply the Royal Navy were cancelled in 1773, with the company’s cannon being removed from all naval vessels.

Gascoigne pushed forward the development of a new type of cannon, originally known as the “Gasconades” but better known by its later name, the “Carronade”. Easily identified by its considerably shortened barrel, the carronade had the same calibre as a long gun, but contained much less metal and so was much lighter, enabling naval vessels to carry many more carronades than long guns. The resulting short range was not a problem as a result of the close-to broadside tactics employed at the time.

1778 – The new weapon was a considerable success and remained in production from 1778 through to the 1850s.

1786 – Carron flourished from the demand for munitions for the French and American wars. Thomas Edington and William Cadell, Junior, in association with the Carron Co, built Clyde Iron Works, on the north bank of the River Clyde, a few miles south-east of Glasgow, primarily to relieve the pressure on Carron for armaments.

1786 – The British government tried to prevent the company from supplying plans and equipment to the Russian Empire, intended to improve Catherine the Great’s weapons foundry at Petrozavodsk; nonetheless, Gascoigne delivered the Russian’s orders and travelled to Russia in May 1786 to supervise the works. He remained in Russia for 20 years, dying in July 1806 in Kolpino near St. Petersburg as Actual State Councillor Karl Karlovich Gaskoin.

1787 – Robert Burns tried to visit the company but when he was turned away wrote a poem about the incident.

1789 – William Symington (1764-1831) was an engineer for the Carron Company and the company made engines for his steamboats, the Experiment and the Charlotte Dundas.

Benjamin Franklin visited the factory, leaving works and is said to have left a design for a stove: ‘Dr Franklin’s stove or the Philadelphia stove’.

William and Henry Haworth, pupils at the Royal Academy worked at the company designing their masterpieces in the form of decoration for many of Carron’s products.

The company continued to produce pig iron through the 19th century, together with cast iron products such as balustrades, fire grates, and the Carron bath. It ran its own shipping line, and produced munitions in both World Wars, and telephone kiosks in the later 20th century.

1812 – The company established such a reputation for quality that the Duke of Wellington remarked in a letter to Admiral Berkley in 1812 that he only wanted cannon manufactured by the Carron Company in his army. The company also made ammunition, including some invented by Henry Shrapnel.

The company also supplied armaments to governments outside the UK, including weapons supplied to the embryonic United States which were used against Britain in the War of 1812.

By 1814 – The Carron Company was the largest ironworks in Europe, employing over 2,000 workers, and it attracted many innovators.

1851 – The first steamship named ‘Carron’ made its maiden voyage from the new port of shipment at Grangemouth to London. 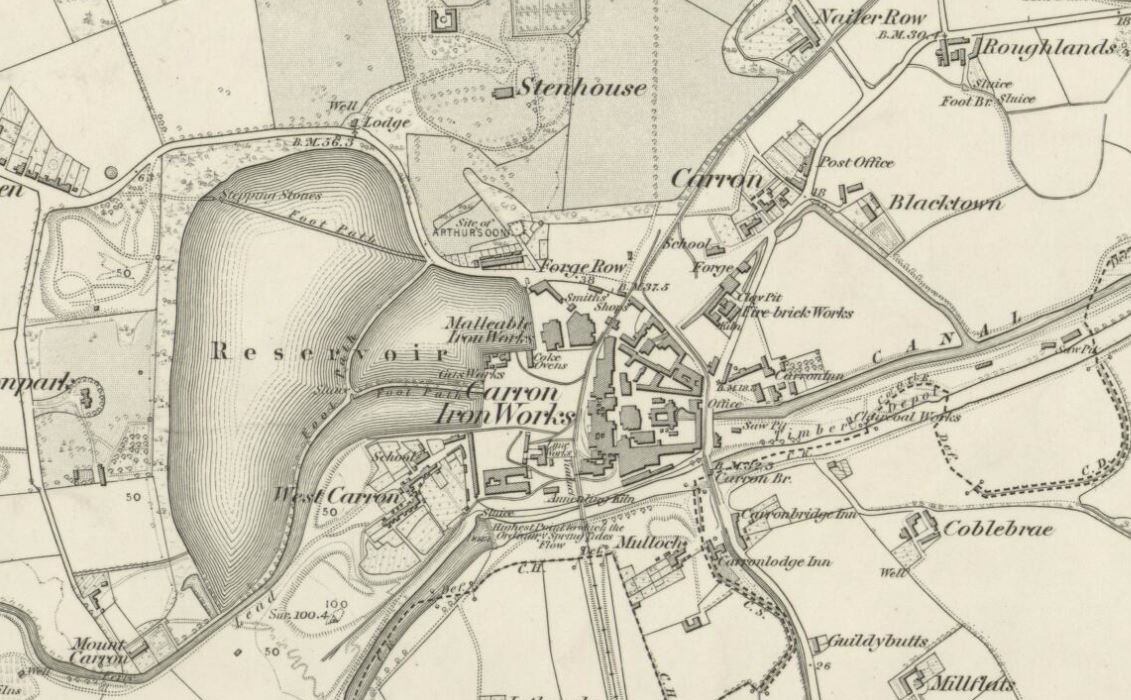 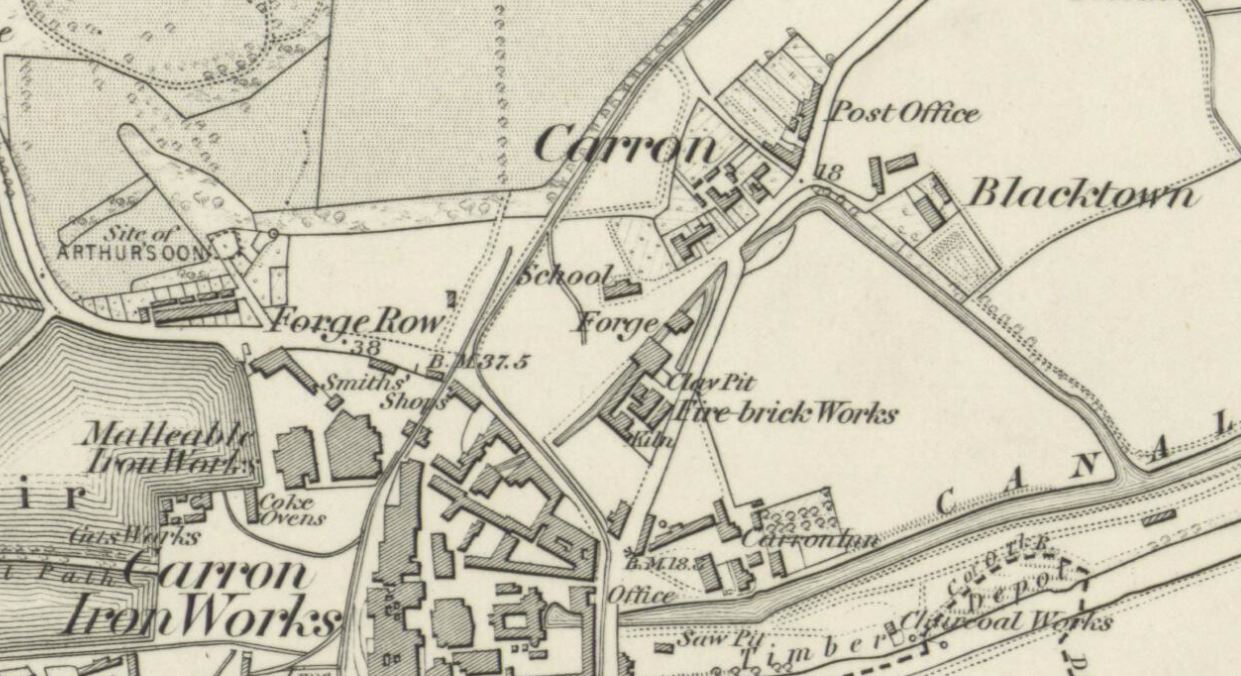 1880 – A new brickworks was built at the North end of the reconstructed ironworks. There were 3 kilns fired with blast furnace gas – Source Kenneth W Sanderson.

1883 – By 1883 much of the Carron site had been modernised. A brickworks was built adjacent to the High Foundry (NS88SE 76.XX) which was fired using blast furnace gases. The brickworks consisted of three kilns, drying area, drying and moulding shed with an overhead conveying system to move the clay from the grinding mills to the moulding area. The bricks made in the brickworks were used to line the stoves produced by the foundry department.

08/08/1887 – Falkirk Herald – this is an interesting article on the Carron Iron Works and makes reference to their use of fire bricks and kilns where they made their own bricks.

Below – C.1905 – photograph believed to be of the Carron Brickworks 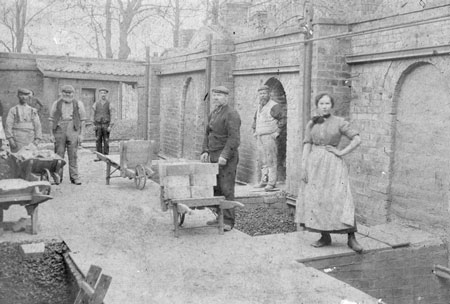 WWI. The steamship ‘Carron’ (the 4th) of 2,534 tons became the HMS Carron and undertook auxiliary work for the Royal Navy in the North Sea, the English Channel, the White Sea and the Mediterranean. Four Carron craft were sunk in the war. 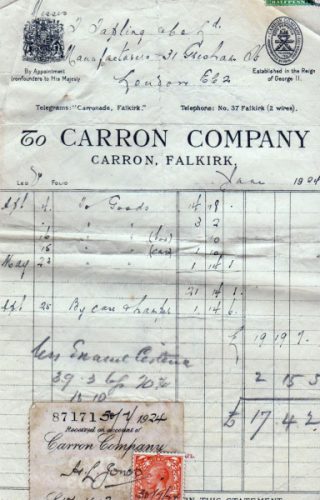 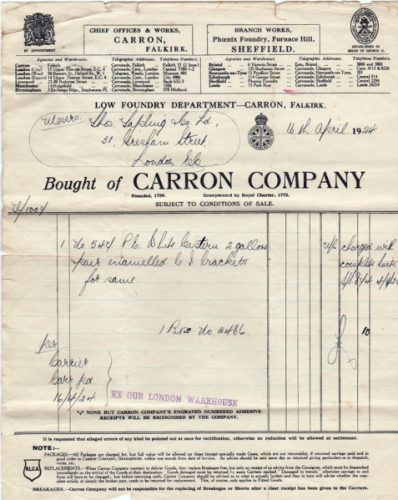 1965 – The company moved into the manufacture of plastic baths.

1982 – The company diversified into plastics and stainless steel, but the works went into receivership in 1982. The Company still exists today under the name of Carron Phoenix and is part of the Franke corporation. They produce both stainless steel and plastic moulded sinks which are sold around the world however some areas of production have been moved to China recently.

Falkirk history society article on the Carron Co  –  click me