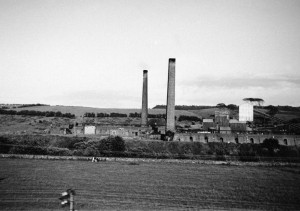 Ayrshire Brick & Fireclay Company Ltd, Carsehead – The brickworks lay on the outskirts of Dalry and was started about 1838 when the Blair Ironworks was built nearby.  Blair did not flourish and in 1856 passed into the hands of the Eglinton Iron company, which had just been bought by William Baird & Co.  Hunt’s Mineral Statistics of 1858 record the brickworks producing 2,700 tons a year of taphole clay for blast-furnaces.  Firebricks were also made.  The fireclay came from Blair Colliery, and later from No. 5 and No. 7 Pits to the south, which were connected to the brickworks with a mineral railway.  The ironworks closed in 1870, and the brickworks passed into the hands of Arthur Logan, Coalmaster, of Ellieston, Paisley.  Logan incorporated the company in 1901, with a capital of £4,000, which was almost all held by James Coats, the thread manufacturer of Paisley.  The company was managed by Logan but it did not prosper, and in 1915, Logan took over the Coats shareholding.  Losses continued and brick making stopped in 1924, but the Company was not liquidated until 1945.  Source Kenneth W Sanderson

21/08/1903 – Ardrossan and Saltcoats Herald – JP Court  Joseph Harper and Wm. McMaster both labourers for contravention of the Trespass Act lodging in the brick-kiln situated at Dalry Brickworks, occupied by the Ayrshire Brick and Fire Clay Company, were each fined in the modified penalty of 5s or 3 days.